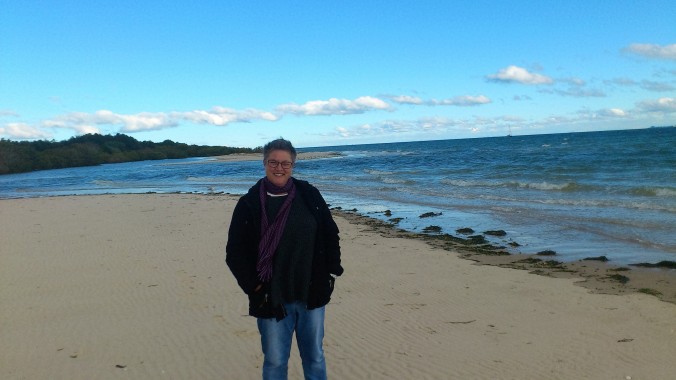 As a mature age student studying philosophy, I’ve watched school leavers struggle to adapt to tertiary education, and the silence of some students bewilders me. When I’m in a tutorial blurting out my thoughts I wonder – does this encourage these kids to speak up or intimidate them? I don’t think I intimidate them because it’s obvious from what I say that I’m grappling like themselves. So, I hope that by speaking up I encourage them to ask questions, and if I say enough stupid things it gives them permission to make mistakes. If nothing else, it seems to ease the pain of the tutors who dread the silence that greets their initial attempts to get the class to participate.

Despite being bewildered by this silence, I remember when I left school and went to art college. I was so in awe of the lecturers and suffered the most excruciating anxiety when I made stupid comments (which was all my comments). Even now, when sitting in on graduate seminars, if I say something I’m unsure of during the Q&A I ruminate for longer than I care to admit. Of course, no one remembers (or cares) what I said. It is a hard lesson to learn – that we are not, in fact, the center of the universe.

I want to discuss the silence of the young women I study with in relation to the diversity problem in philosophy. In philosophy, women and minority groups are underrepresented.  Women enroll in equal numbers to men in foundation courses, but they drop out soon after this. Consequently, there are less women in graduate schools and holding academic positions. The fact that female representation in philosophy is equivalent to STEM subjects (science, technology, engineering and mathematics) is a topic that is gaining attention and research is growing to work out what the problems are, and how to fix them. This is my offering – based on my experience as a mature age woman sitting in class with these young women.

But before I start, some brief background into why diversity is important. From what I can gather, the initiation into philosophy doesn’t start until a student gets into graduate school. At this stage, they become a member of an in-group and the real apprenticeship begins. Up until this stage, as an undergrad, students are generally bumbling through the material on their own. I believe that if the methodology – and its value – is not explicitly taught at this level, students have difficulty linking the value of philosophy to the rest of their lives. And it is the value of philosophy – particularly its methodology –  that is the reason why achieving diversity is so important. Philosophy teaches skills that need to be taught to underrepresented groups. If we are to change the status quo, if we want identity politics to gain force, then the ability to think clearly, reason well, and construct rigorous arguments must be distributed more broadly in the community. Philosophy can give disadvantaged groups powerful tools to address inequality. If women are dropping out before they reach graduate school, philosophy not only loses the contributions that these women could make – these women also miss acquiring skills that would help them in the future.

It’s important to understand the type of girls who turn up to philosophy classes. These are the ‘good’ girls. I remember them from school. I was probably one of them. These young women aim high, in fact they aim to be perfect. And yet, this idea of perfection is tied up with their gender conditioning. Being perfect, for these girls, entails different behavior to the perfection of the boys. If you doubt this gender conditioning I challenge you to walk through your local mall and count how many of the female children are not dressed in pink. The young women at university are used to gaining their praise by fulfilling strict, and appropriate, gender roles.

Remembering back to my (fraught) adolescence, I recall what these gender roles were. There are a couple of points that are relevant to how these girls behave in class. To begin, young ladies do not make fools of themselves in front of boys. Also, and this one is more difficult to articulate, they are taught to either not trust their own thoughts and opinions (relying instead on those of their teachers and peers) – or, if they do have their own ideas (which of course they do), they don’t blurt them out. I suggest that the combination of these factors is lethal in the context of philosophy tutorials.

Tutors face a problem if the conditioning of these students is causing them to place more value on their appearance than their capacity to think for themselves. I know this seems like a harsh attack on my sex, but there is some truth to it. I don’t blame these girls, I pity them the pressures that society places on them. But the result, if they remain silent in class (as they do), is that tutors do not know what they are thinking, or whether they understand and are engaged with material, or whether they are simply bored.

The point I want to make is that they turn up to university with this conditioning. It is not the climate in the classroom that is to blame. From what I can see, tutors want these girls to speak, they are waiting for them to speak, and nothing bad is going to happen if they do speak. The only thing that is stopping them is themselves.

But the question is why philosophy in particular – and not the other social sciences – is driving these young women away. Research points to several factors. These include stereotype threat (where a group underperforms in an area because of a negative stereotype about that group – for example, if women believe they are worse at math than men, they underperform in tests). It’s also been suggested (and contested) that women have different intuitions to men regarding philosophical questions and, consequently, believe they are no good at philosophy if they disagree with their tutors – resulting in them leaving. Another suggestion is that women have a ‘fixed’ mindset about philosophical ability (where it is like a ‘gift’) whereas men have a ‘growth’ mindset – thus, males are less effected by setbacks because they trust they will improve with practice. Others have suggested subtle and overt sexism in the philosophy profession, or cited the combative nature of philosophical debate as something that women dislike.

While there is value in these suggestions, the women we are talking about – the ones who drop out early – are undergrads. They may be unaware of the diversity problem in philosophy, and ignorant of the philosophy profession more generally.

I suggest that the methodology of philosophy might be a problem. In other subjects much of the material, and the answers to questions in class, can be drawn from the readings. While philosophy classes have readings, the goal in tutorials is for students to think critically. I’m unsure if this is different to other social sciences – but what is different is that the ideas in philosophy can be quite abstract – not grounded in facts in the way that history is. Students are challenged to offer their own ideas. And this is terrifying for some students. Particularly, I think, for these young women. They can be mortified (and shamed) by the thought of embarrassing themselves.

Speaking up in philosophy and sharing our ideas can be hit and miss. This applies to everyone. The thing with speaking up is not to be scared. No one gets it right all the time, and if they did there would be no point in asking questions. The most important thing, in my opinion, is generosity. We work on not judging others and hope that they don’t judge us. But by speaking up you signal yourself as a member (or potential member) of a community. You take a risk – but the risk is outweighed by the desire to participate and contribute in the process of learning. From what I can gather, philosophy is a team sport. It is not achieved in isolation.

I’m not sure how the philosophy community can get these young women on board. I think that helping them to understand why philosophy is so important, and that the methodology is something everyone can learn, would be good. And perhaps making them aware of the conditioning that is holding them back. I’m not sure how you do that, but there might be some feminist readings included at a foundational level. Philosophy can give so much to these girls by teaching them to think clearly and for themselves, and this will give them the confidence to overcome some of their fears. It is sad if they miss this opportunity.